What is Certification/Listing and How Does It All Work?

What is Certification/Listing and How Does It All Work? 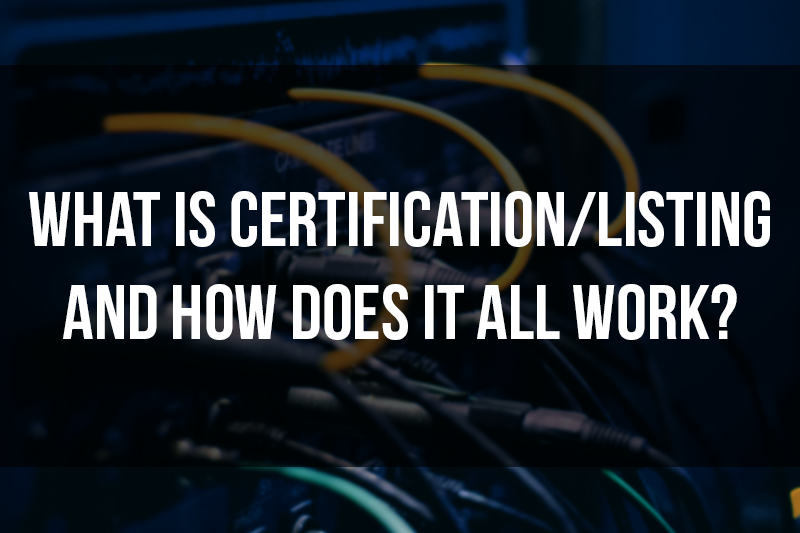 In Canada and the USA, regulated products are required to be Certified or Listed by approved organizations for the respective markets.

The requirements for each country are different and they differ even further for different products.

To keep this basic, we will only discuss electrical products. Similar, not identical, systems are used for other types of products, such as building materials, gas appliances, plumbing fixtures and fittings, clothing and etc.

In Canada, electrical products are regulated by the Authorities Having Jurisdiction (AHJ), these being the local electrical authorities.

The history and operation of the Canadian Electrical Code, Part I (CEC)

The preliminary work in preparing the Canadian Electrical Code began in 1920 when a special committee, appointed by the main Committee of the Canadian Engineering Standards Association, recommended its development.

A third meeting of this Committee was held in June 1927 with representatives from Nova Scotia, Québec, Ontario, Manitoba, Saskatchewan, and British Columbia in attendance. At this meeting, the revised draft, which had been discussed at the previous two meetings, was formally approved and it was resolved that it be printed as Part I of the Canadian Electrical Code.

The Committee on the CE Code, Part I, is composed of 41 members, with representation from inspection authorities, industry, utilities, and allied interests.

The main Committee meets once a year and deals with reports that have been submitted by the Section Subcommittees, which work under the jurisdiction of the main Committee. Suggestions for changes to the Code may be made by any member of the Committee or anyone outside the Committee as outlined in Clause C6.

What is the objective of this Code?

The objective of this Code is to establish safety standards for the installation and maintenance of electrical equipment. In its preparation, consideration has been given to the prevention of fire and shock hazards, as well as proper maintenance and operation.

The scope of this Code covers all electrical work and electrical equipment operating or intended to operate at all voltages in electrical installations for buildings, structures, and premises, including factory-built relocatable and non-relocatable structures, and self-propelled marine vessels stationary for periods exceeding five months and connected to a shore supply of electricity continuously or from time to time, with some exceptions.

The Code has the following statement that helps to clarify that equipment has to be certified:

Approved (as applied to electrical equipment) —

Canada in accordance with the requirements of

(a) CSA Group Standards; or

the Standards Council of Canada, or other recognized documents, where CSA Group Standards do

not exist or are not applicable, provided that such other standards or other recognized documents

(i) are correlated with provisions of the CE Code, Part I; and

(ii) do not create duplication with standards already listed in Appendix A; or

(2) equipment that conforms to the requirements of the regulatory authority (see Appendix B).

The intent of the Code, by clearly defining the word “Approved”, is to remove any doubts about what it takes for products to be certified and who the certification should come from.

In Appendix A lists standards used to certify electrical equipment for the purpose of being “Approved” as defined in Section 0 within the Canadian Electrical Code.

By clearly defining the above requirements, it removes any confusion and clearly sets the criteria for why, who, what and how an electrical product is to be approved. This helps to unify the requirements across Canada. The words “Approved” and “Certified” are interchangeable.

In the USA, electrical products are regulated by the Authorities Having Jurisdiction (AHJ), these being the local electrical authorities. Unlike Canada, not all jurisdictions have adopted the National Electrical Code (NFPA 70).

This makes the process and following the requirements much more complicated. To make the requirements even more difficult to follow and understand, there are over 4000 jurisdictions in the USA, which includes Federal, State, county, city/town, with each setting its own rules and laws.

History and Development of the National Electrical Code (NEC)

Unlike the Canadian Electrical Code, the NEC has the following disclaimer:

Any certification or other statement of compliance with the requirements of this document shall not be attributable to the NFPA and is solely the responsibility of the certifier or maker of the statement.

The purpose of the NEC is the practical safeguarding of persons and property from hazards arising from the use of electricity.

Part of the difference between the CEC and NEC is in the definitions. For example, following is the definition of “Approved” in the NEC:

Approved. Acceptable to the authority having jurisdiction.

There is no mention or clarity of who shall approve electrical equipment or how.

Another important definition in the NEC is “Listed”:

Equipment, materials, or services included in a list published by an organization that is acceptable to the authority having jurisdiction and concerned with evaluation of products or services, that maintains periodic inspection of production of listed equipment or materials or periodic evaluation of services, and whose listing states that either the equipment, material, or service meets appropriate designated standards or has been tested and found suitable for a specified purpose.

The means for identifying listed equipment may vary for each organization concerned with product evaluation, some of which do not recognize equipment as listed unless it is also labeled.

Use of the system employed by the listing organization allows the authority having jurisdiction to identify a listed product.

As per the above, the “Listing” can be conducted by any organization accepted by the AHJ. This definition creates many differences among the regulatory systems within the USA, from city to city, and state by state. Whereas, in Canada the term and approval process are standardized, consistent, and adopted by all jurisdictions.

Accreditation for Certification Organizations are conducted by “Accreditation Bodies” and are globally recognized if they are Signatory members of the International Accreditation Forum (IAF).

For an organization to be “Listed”, it does not have any set international criteria which must be followed. It may be ISO 17065 and/or any other requirements.

As close as these two (2) neighboring countries are with regards to the electrical infrastructure, their regulatory system differs significantly.

Some of the reasons could be due to size of population, local legislative laws, insurance and legal systems.

Neither system is better then the other, as they both accomplish the same criteria for personal and property safety.

Email: Send us an Email

Find what you need