It is a known fact that the testing industry holds consumer safety as the highest priority.

But can a single test resulting in an ASTM E84 Class A fire rating really provide the confidence of safety that consumers need?

A Glance at Fire

Fire is one of the first major tools adopted by our species.

We’ve used it for everything, from warmth to sterilization for thousands of years, so you’d think we would have it figured out by now. In reality, despite knowing a great deal about the nature of fire, it’s incredibly difficult to predict its behavior even today.

In broad strokes it sounds fairly simple, but the turbulent motion of hot gasses in a fire are so complex in their mechanics that even supercomputers can only tell us so much about the intricate movements seen in fires.

Given the complex nature of fire, standards committees around the world have had to get creative with how to characterize building materials for fire safety.

One important metric, in the fire safety world, is the measurement of the rate at which a flame front tends to propagate along a flammable material.

We are talking about the Flame Spread Test, a common test that’s done to evaluate the flame front propagation characteristics for a material, as defined in the American ASTM E84 standard. In this test, a building material, such as plywood, is cut into sections to fit a 21 inch by 24-foot rectangle.

The plywood is placed into a 24-foot-long tunnel, called a Steiner Tunnel, lining the ceiling of the tunnel. A draft is then let into the tunnel carrying fresh, oxygen-rich air. A gas burner is ignited at the upwind end of the tunnel, causing the plywood at that end to burn. As the plywood burns, the flame front travels along the tunnel from the upstream end to the downstream end.

But How Reliable Are Fire Ratings?

Standards developers have done a relatively good job of specifying a tunnel that can yield consistent results between tests for something as chaotic as fire, but the real weakness in these tests is that the environment in which a material burns can seriously impact the burning characteristics of that material.

A material that appears to produce a very slow-moving flame front in one scenario may prove to burn quite violently in another. 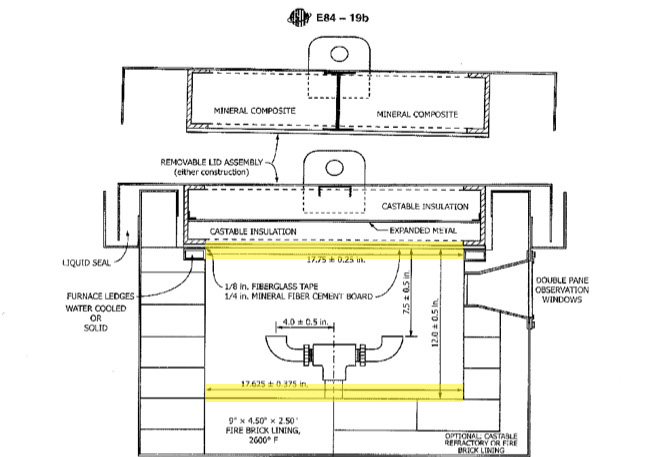 In a recent project, we tested a material under two very similar standards: ASTM E84 and the Canadian equivalent CAN/ULC S102.

Though these standards are nearly identical, the test results were radically different. The Canadian standard for Flame Spread testing is very similar to ASTM E84, with a few major differences.

First, three different test runs must be done on the material rather than the single run required in E84.

Second, for materials that would normally require mechanical support to remain on the ceiling of the tunnel in E84, CAN/ULC S102 requires that the alternate S102.2 standard is used, placing the test material on the tunnel floor instead of the tunnel ceiling (see highlighted sections in diagram below).

In general, the S102 standard includes more provisions to ensure that the sample material is tested in a way that mimics the environment in which it will be installed.

In the results of our recent project, the test material was found to be too flexible to rest on the tunnel ceiling as for the Canadian standard, therefore, it was tested on the floor.

The ASTM E84 test resulted in a very slow burn of the test material, resulting in a Class A rating. However, when we tested that same material under the S102.2 standard, the impact of placing the material on the floor, without the need for supports, had such a radical impact on the flame spread that the result was a rating equivalent to Class C in ASTM E84.

The same material, in two nearly identical tests, produced flame spread results on opposite ends of the spectrum.

How Is This Possible?

The truth is that even though a lot of consideration was put into developing standards, outlining the required tests procedures and regulating building materials for flame spread characteristics, the behavior of fire in the real world is too complex to be captured in a single test.

In this case, the difference between burning on the ceiling and burning on the floor made enough of an impact on the flame spread across this material that someone reading only the Canadian S102.2 report would have a completely different understanding of the flame spread behavior than someone reading only the American E84 report.

In conclusion, fire is a complex phenomenon. In today’s age, it’s easy to assume that engineers would have everything measured and regulated to perfection, but the reality is that some scenarios are too chaotic to be predicted with certainty, especially from a single test.

The lesson to be learned here is that for certain types of tests, like Flame Spread, a single report should not be taken at face value.

To truly understand how a material will burn, a variety of tests are needed.

Understanding this principle is critical to providing the safety and consumer assurance that these standards are designed to enforce.

To learn more about Fire Testing, you can check some of our other resources on the subject

What standards are available, and how do they compare?​

What if you are not an engineer? Take a look at ASTM E84 from a more basic and less technical stand point!