Carbon Monoxide (CO) safety and awareness has been one of TSSA’s most significant, risk-informed strategies for several years.  As a leading cause of accidental poisonings in Ontario, CO awareness is a top priority for consumer awareness and keeping Ontarians safe. 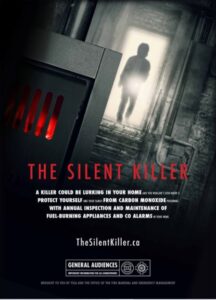 To that end, TSSA created a new public awareness and advocacy strategy for tackling this user-related risk. The latest public awareness campaign – The Silent Killer – launched this week across the province in various digital, social and print media including:

The campaign was launched in partnership with the Office of the Fire Marshal and Emergency Management and CO detector manufacturer KIDDE and will run through to April.